How To Recover Deleted Files From Google Drive

5 Best Tools To Reduce The Size Of Your Photos

How to do Screen Recording with Audio In MacBook

QuickTimePlayer is a great app for screen recording that comes pre-installed in the MacBook OS operating system that powers every Mac.

If you want to record screen activity on a MacBook, you no need to download any other software as MacBook already has a built-in app called QuickTimePlayer. This QuickTime video player app allows you to watch videos as well as allows you to do screen recording with audio. By using QuickTime Player you can also record a cropped / selected portion of your screen instead of entire screen. It quite easy and simple to use.

How to do Screen Recording in MacBook 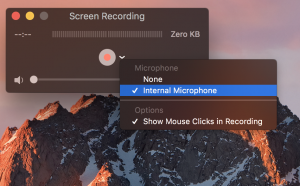 SEE ALSO : How to Use Multiple Desktops on a MacBook

SEE ALSO : How To Protect Your MacBook Pro